Serious Case of the Giggles!

I have been giggling nonstop for the past 48 hours ... yes ... I was even laughing in my sleep!  I'm not sure I can communicate what was so funny ... it might be one of those instances where you had to be there ... 33 years ago!  So let me begin by apologizing ... there are only a handful of friends involved and they may not even find it as funny as I do.  Remember ... we have already established that only a few unfortunate people "get" my odd sense of humor!

I best begin with the back story... 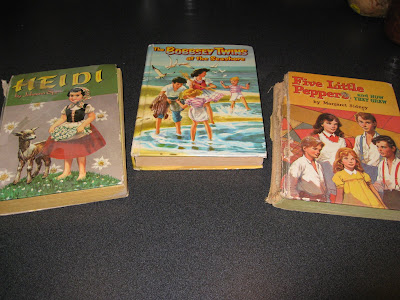 I have loved books and reading my entire life.  These three books are from my childhood.  We didn't own many books as a family, Heidi and The Five Little Peppers were gifts from two of my great aunts.  The Bobbsey Twins book I bought myself.  I believe that I owned a few other Bobbsey Twins books but was never able to locate them later as an adult.  I was and continue to be an avid reader ... I am sure that I read nearly every book available in the closet sized library located in the one room country school I attended. 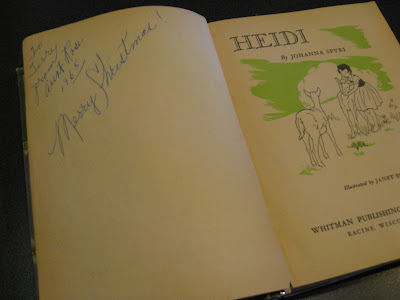 Heidi was by far my favorite book ... I read it multiple times during the summer months when I wasn't in school.  As you can see, it was given to me as a Christmas gift from my Great Aunt Rose in 1965 ... I was eight years old.  I learned at a very young age that reading allowed me to travel to places far away or to places that only existed in the imagination of the author.  It allowed me to time travel ... to the past and into the future.  The point here is that as a family we didn't own a lot of books, and only received them as gifts rarely.

Fast forward to spring of 1972 when I was nearly finished with my freshman year of high school.  Of course my favorite class was English and my favorite room was the school library ... lets just say that the library felt like heaven ... the smell of books was intoxicating!  It still is!

Mrs. Jensen, my English teacher was my favorite ... very professional ... but encouraged my writing and reading.  She asked me to participate in a local writing competition held that year, and I won!  Yes ... that was the beginning and end of my writing career ... obviously ... but what I want to show is how supportive and nurturing she was.  You can imagine our shock and surprise when my mother received a request from Mrs. Jensen for a parent conference.

Now ... when it came to my family ... the teacher was always right.  This parent conference was taken very seriously, by my parents and myself.  I was so nervous ... my parents were very concerned.  I can remember being very anxious as I waited at home for my mother to return from her conference with Mrs. Jensen.

Please know that Mrs. Jensen's intentions were motivated by her sincere concern for me and my future ... and remember ... it was 1972.  Basically, she was deeply concerned about my development as a young adult, she was worried about the type of books I chose to read in my free time ... I wasn't reading the books that were "normal" for young women my age.  I remember that during that year I had read all of Jack London's books and short stories and had discovered Tolken's Lord of the Rings.  It had never occurred to me that they were unusual choices ... I only knew that I loved them.

My first response was that this was making a big deal out of nothing ... I even said that I thought it was silly.  Lets just say that my mother did not think it was silly ... she insisted that I begin reading appropriate books ... and that the discussion was closed.  Being mostly obedient, I started reading the books my friends enjoyed ... brought them to class ... and gave book reports on them.  But secretly ... under my covers ... in the middle of the night ... I continued to read what I loved.  Yeah ... is case you haven't noticed ... there is a bit of deviant blood running through my veins. ;-) 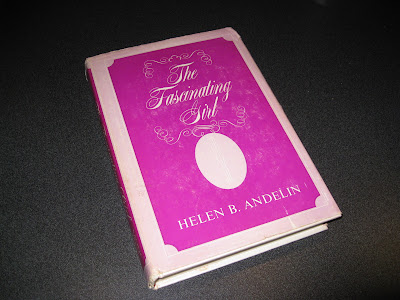 Gosh!  I was excited ... a new book!  Remember ... we didn't own many books!  I immediately opened and began reading the jacket cover ... this is what the first two sentences say ... quote ...
"THE FASCINATING GIRL is written to single girls and provides a step by step guide how to gain the attention and interest of men and eventually win the particular man of your choice.  It explains how to understand men -- their characteristics, peculiarities and sensitive masculine nature -- and how to be the kind of a girl that men adore."
I put it down and demanded, "Who sent this to me?"  Mom was surprised by my reaction and said that she didn't know.  Over the next couple of weeks it became evident that all the important women in my life knew that I had received the book, because they would ask me about it!  Ugh!  Eventually it occurred to me that they all had become concerned about my development ... as had been Mrs. Jensen.  True ... I was a tomboy ... loved working in the fields ... showing horses ... but I also loved sewing ... cooking ... needlework ... decorating.  I thought that was all pretty normal ... at least it was normal for me! ;-) 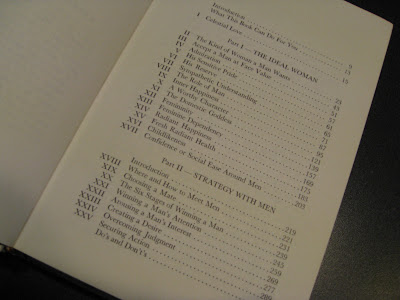 Table of Contents Very Funny!
At first I refused to read the book!  I was upset that anyone would think that my femininity was underdeveloped!  Eventually I did read it ... at 15 years of age, The Bobbsey Twins, Heidi and The Five Little Peppers don't quite fill an avid readers appetite.  Mostly I found it entertaining ... although once you get past the "man trap" behavior there are valuable concepts.  I never shared this book with any of my friends ... yes, I was embarrassed by the content ... but mostly, I was demoralized that people were concerned about my feminine development.  I hid the book in my room. 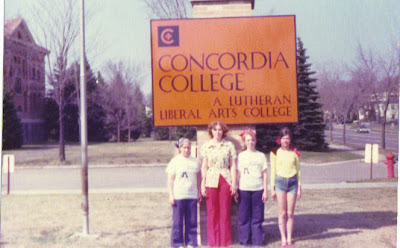 Heidi (my roommate), DeeAnn (H.S. friend), Me, Kim(Dee's roommate)
... my mother helps me move into my dorm room ... you know, all the usual things on that day.  Later that evening, while my roommate and I are getting settled ... guess what I find in one of my boxes?  You guessed it ... A Fascinating Girl!  I immediately hid it!  My mother had slipped it in ... I was embarrassed all over again!
Now we travel to my sophomore year (76-77), my friends and I are questioning the values we'd been raised with ... we're between the ages of 19-21 ... we're young, ambitious, invincible, and we think we know everything.  For the first time in our lives we were exercising defiance ... of course we called it independence ... remember, we thought we knew everything!  ;-)  It was with this superior attitude that I finally took this book out from hiding and shared it with my friends. 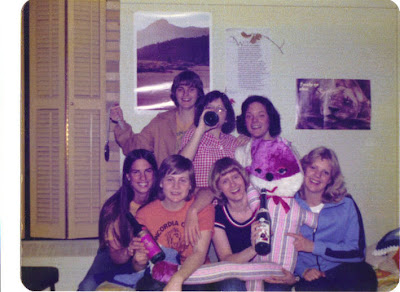 We spent many an evening reading aloud from this book!  Laughing ourselves senseless.  I can't speak for the others ... but I refer to it as my "man hater" stage ... which of course made the book even funnier.  What is really humorous now ... isn't the book so much ... but rather this picture which shows us being about as "wild" and defiant as we ever got!  What a hoot!
Over the years, these girls and I have laughed about the book and ourselves every time we see one another.  I thought the book had been lost during my move to Alaska in 1979.  Saturday, Mr DillyDally and I were unpacking some boxes that we hadn't looked at since our move to Cordova in 1984 ... I know, we're pathetic ... and I found the book!  All the memories surrounding it came to the surface ... and I have had a bad case of the giggles ever since!
On Saturday night ... just like the Saturday nights 33 years ago ... I opened this book and read segments of it  aloud ... it is still entertaining ... Mr. DillyDally and I laughed until we couldn't breathe ... what fun!
Nearly forty years later I'm still an avid reader ... I like all kinds of books ... occasionally that deviant behavior surfaces ... I will probably never find out who ordered that book for me ... but Mr. DillyDally says that I don't need to worry about my feminity any longer ... ;-) ... yep, I'm convinced that I'm normal ... and ... I cannot stop giggling!
Posted by Mrs. DillyDally at 10:46 AM