Saturday was the first time I had sat down at my sewing machine in over two weeks!  It is not uncommon for me to sew (at least a little) every day.  "Her Majesty" does not like to be ignored...and in truth...she had been neglected.  Suffice to say...she was ticked!

This weekend she decided to let me know just how angry she was...let me explain...

It took quite a bit of time on Saturday to find her in the mess called my sewing room.  While preparing for the holidays, all the DillyDallys were stuffing everything on to the sewing table inhabited by "Her Majesty"...she was not happy...she doesn't like to share...after all she is royalty!

Just for the record...I did apologize...told her how much I had missed her...and promised that she and I would have hours of quality time this week.  Foolishly I thought that amends had been made... 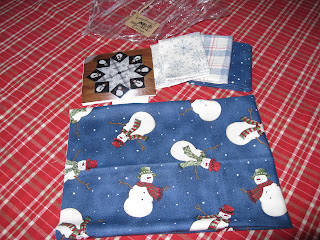 While in Bemidji, Minnesota this November...I needed serious retail therapy and went to one of my all time favorite quilt shops, Emily's Country Cottage.  She always has a ton of samples...and many of them are her own design.  I picked up a couple of these cute candle mat kits.  They inspired me on Saturday...so that is what I pieced after cleaning up the piles around Her Majesty.  The piecing went moderately well...Her Highness was a bit pouty...and I assumed all would be well the next morning.

Sunday morning came...I had slept well...made my coffee and turned on NPR...changed my needle...selected the thread I would quilt it with...put on my machine quilting gloves...got in position...all systems were go!  When I hit the foot pedal, that needle went every where but the direction it was supposed to.  I could not figure it out...was I dizzy?  Were my glasses extremely dirty?  Surely it wasn't the caffeine...I hadn't finished my first cup!

I forced myself to continue...things did not improve...I really began to worry...is my blood sugar too low?  Is it too high?  Am I having a stroke?  Or maybe a heart attack?  Should I call for Mr. DillyDally?  By the time I had convinced myself to call 911, I had finished quilting the eight pointed star.  It did not have the soft "loop-da-loops" I had tried to do...they were more like "loop-da-loops" on serious illegal drugs!

I was confused...distraught...somewhat frightened.  And then I noticed the control panel on "Her Majesty".  It was set on a decorative stitch!  I had been trying to do free motion quilting while she was doing decorative stitches that had the needle going in every direction possible.  It wasn't me after all...it was....

Remember..."Her Majesty" is royalty, so she refuses to take responsibility for any mishaps we might experience...according to her, everything is "operator error"...yes everything is always my fault!  But just this once I decided to have the courage to stand up to her...I was not about to take the fall this time.  To save face we decided to blame the snowmen...yes, that's right...the "loop-da-loops" look like that because the snowmen were intoxicated! 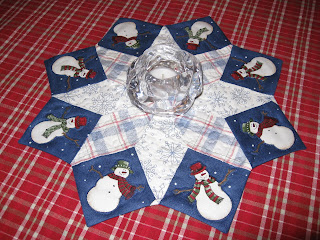 Her Majesty and I are now at peace...I made another one today...the snowmen were sober...the loop-da-loops have loops...and from now on when we have differences, we'll find a third party to take the blame!  ;-) Go dillydally!