Monday was a very typical day here in my remote corner of the planet. 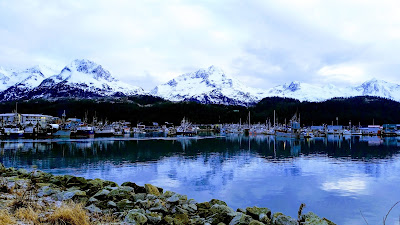 Everyone was busy going about their business ... I spent the day teaching.  After the work day, there were basketball games to watch, dinner to prepare ... all the usual weekday evening activities.  We went to bed around 11:30, a bit of reading and then lights out.  Mr. DD and I were obviously in a deep sleep ... neither of us felt the earthquake (details found here) or heard the landline phone ring.  It wasn't until the sirens began that we started waking up.  Our neighbors called to let us know that there was an order to evacuate.  It was time to move!  Quickly!  Brother and Girlfriend live above the Tsunami Undulation Line ... that became our destination.

While we slept soundly through the quake, the furbabies did not.  It was obvious that they were alarmed.  When dogs are frightened they stick to their humans like velcro ... cats, not so much!  Flicka refused to come with us, we could not coax her out of hiding ... it tore my heart out to leave her behind.

It was nearly 1:00 am when we headed up the hill.  There were traffic jams at several intersections in town as everyone was making their way to higher ground.  Wet snow was falling ... it was slippery ... cars were having difficulty ... a real mess.  We decided that we could get to our destination faster by walking the remainder of the way ... so we parked the car and walked up the hill!

We were happy to be with family ... the dogs were thrilled that we were having a "pack party" in the middle of the night!  The "All Clear" was announced around 4:00 am.  We were anxious to get home for all the obvious reasons, but especially to check on Flicka.  We found her snuggled sweetly on our bed! She couldn't understand our concern and appeared perturbed when we crawled into bed and disturbed her sleep!  Silly Kitty!
School started late today ... a chance for everyone to get a bit of sleep.  I spent the morning enjoying the calm ... and worked to reclaim some normalcy.
There is comfort in routine ... everyone enjoyed the return of "business as usual" today!  We are embracing the calm!